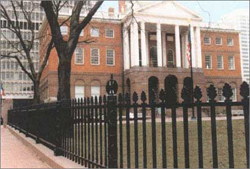 Over 1000′ of fence and four double entrance gates were made for the perimeter of this historically important site. The posts were made of cast iron. The finials were made of ductile iron while the balance was steel. Each panel weighed over 500 lbs with 1 1/4″ solid square pickets. The entire project was Colorgalvanized. Four cast iron and glass lanterns with elaborate bases were made at two of the entries. These lanterns were gas lamps. All of the original gates on the building were restored and colorgalvanized by us also.